My last day at at my current place of work came to an end on Friday. Nearly 11 years of service and I can't say I'm sad to leave.

I'll be missing some people, but since I decided when creating this blog not to namecheck my friends, especially those connected with work, by name, I can't, regrettably, give this item of somewhat significant news much justice. If you're one of them and should stumble across this blog, my thanks probably extends to you.

Work has become a hotbed of politics of late. Too much politics, too much (and ever-expanding) layers of upper management re-arranging deckchairs as the Titanic drifts towards the iceberg. I'm not saying the my ex-employer's future will be end in tears or even be especially bleak - events tend to ride themselves out - but working there isn't the same as it was for the first five years or so. As everywhere now, an honest day's work cannot be had without involving huge swathes or corporate bollocks intervening, and to honest, I just don't care enough about them to be arsed. There have been some large holes in this blog where I've simply been too demotivated or simply depressed to write anything, and much of this is as a direct result from what was going on in the workplace.

Despite this, I have come across some fine people there. Some of these lovely colleagues, the ones who didn't get away before I did anyhow, gave me what I would have most wanted, having just about all the material goodies I reckon I need in life. 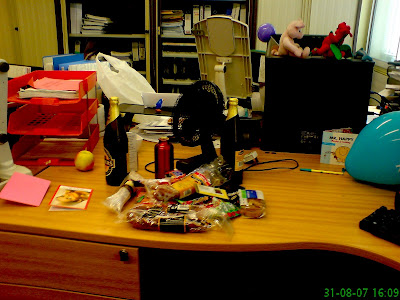 Salami, pork pies, Harribo sour jellies which I can't get enough of, and cider. They know me so well. In a vain nod towards the healthy lifestyle I don't possess (or ever will), they even included an apple. Wasn't there enough health-promoting Magners already?

So fairwell old employer. Hello new one (in two weeks' time). More news on that when it happens. 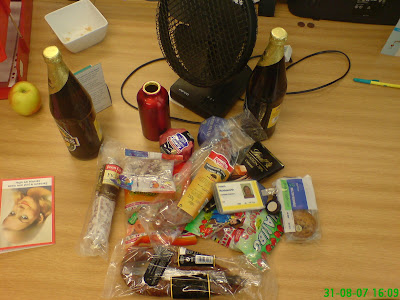 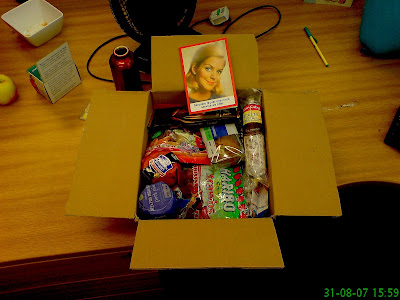