A Titan-ic admission of guilt 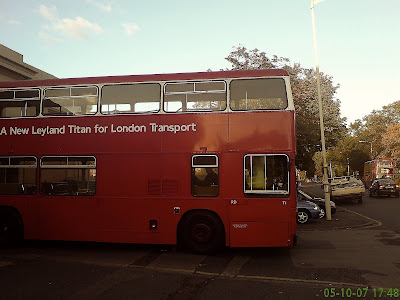 I have managed to get through over three years of writing this blog without telling the world at large that I'm a transport nerd, especially when that transport concerns me directly - so any London centric news interests me. I'm not a fully fledged anorak, but I'm fairly close. Keen readers may have spotted that I tend to include stories about transport which interest me.

Well here's a nice couple of pictures I took while on my way home from work. I was passing, on a detour, Barking bus garage, when I spotted this little beauty parked outside, with its nose, sadly, facing the street, so there was no way I was going to get a frontward view. Here's a couple of sideways shots of London Titan T1, the first ever Titan to enter London service back in 1979. The bus was done up in full 70s paint job with 'multi-ride' labelling on the front. Attention to detail also includes the RD garage code on the side. Hornchurch garage (RomforD) no longer exists and this bus would have been transferred to nearly NS (North Street, Romford). For London bus nerds of 30 or 40-something vintage, this is a wonderfully evocative animal. I remember how excited I was, aged 10, when the first Metrobuses appeared on one of my local routes, the 90B from Kew Gardens to Yeading (as was then). I'd never heard anything like them, the they did make the future seem a brighter place. 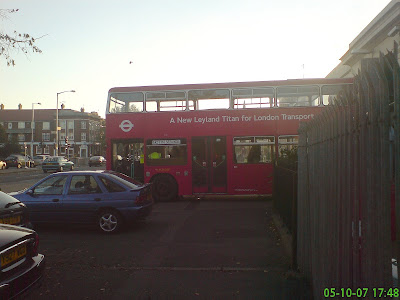 A lot of people were upset when the last Routemaster was withdrawn from regular service use. I was pretty sad, but the Titans, Metros and even Fleetlines were my generation's London buses when the last Titan went, more or less unremarked, this was a sad moment for me. I can't get so an excited over an ALX400 or President, competent machines though they are.
Posted by Adam at 5:59 pm