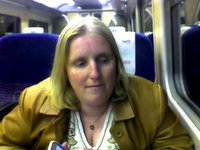 What do you buy for the woman who has everything? (That's her on the right). We are talking 40th birthdays. We are talking WIFE’s 40th birthday. And yet, after 6 mainly happy years of marriage, I’m still none-the-wiser. She’s a gadget freak, a technophile and, like me, thinks Asda contains all the fashion she’ll ever need, so clothes are not an option and she has all the technological whiz-bangs you could throw a stick at. I may have go down the jewellery route, but then she’d have to be there as its such a personal thing.

I suppose I could buy her a Mac. At least then she’d have a computer which works for more than five minutes.

Customer service at Watford Electronics, also known on the web as …no, if you want their site, go find it. I’m not going to help you as their service is the worst I’ve come across from a company, ever. It makes 02 seem like a company of semi-evolved simians.

Our Aries computer, a nicely spec’d one, with good components, packed up a month after we bought it (see previous excited blog entry). I’d guess it was the main motherboard taking leave of itself because it only got as far as showing us the BIOS info screen.

They said they’d pick it up (even after we reminded them we’d paid for onsite: they didn’t care). Having waited in three times for Amtrak to turn up, each time Watford then regretfully informed us (after waiting 20-40 minutes on hold for an answer) that Amtrak weren’t going to arrive that day because Watford hadn’t given them actually been decent enough to ask them to drive over to our house!). I could go on. If you are interested in getting a diary of all we went through, which fortunately Lynn kept as she didn’t trust their customer reps from the get-go, I’ll send it to you. We then tried to claim our money back. Either no replies to emails or constantly evasive customer service reps. We have had to involve Barclaycard who were so appalled after reading the log, that they couldn’t see how they wouldn’t be able to claw the money back on our behalf. We’re awaiting their further reply.

Now for anyone not familiar with Watford Electronics, they are one of the better-known independent PC manufacturers in the UK. They have 20 page adverts in Computer Shopper. They have been around since I was a kid, in fact our school bought loads of their kit. The company I work for, before going for Dell kit, kitted their offices with Watford computers. They are not, or sorry, were not, a Mickey Mouse organisation. They are also cheap without compromising on quality. The fact that our PC’s motherboard packed up doesn’t really count against them as all computer components might fail, even the best ones. That’s why you buy onsite maintenance.

Keep your head. Avoid them. Your sense of sanity will love you forever. Thank goodness for the reliable, trouble-free world of the Mac.

Mood: Lazy
Sounds: The magic of Radio 2 – I’m in the office, just about to leave so don’t have much choice about this.
Posted by Adam at 4:38 pm

Human beings, who are almost unique in having the ability to learn from the experience of others, are also remarkable for their apparent disinclination to do so.
Douglas Adams- Posters.

I came here today after my friend told me about you. I am really impressed with what you people are doing. I will be visiting you all the time from now on!