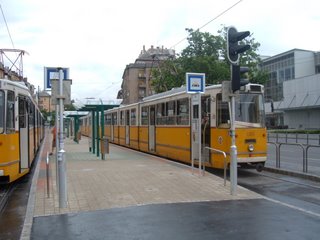 We have just returned from a week in Hungary which was excellent and which I may blog later properly with some pix, though knowing me, this entry will end up sufficing. Needless to say we did the usual tram-fest (lots of old beauties there) and ate lots of goulash at a restaurant about 10 minutes walk from St Stephen’s Boulevard (sorry, can’t remember what its called in Hungarian, but that’s a good-enough translation), which was phenomenally good, both in terms of the gargantuan portions and the recklessly cheap prices, and which we visited 5 times, the food was so scrumptious. We tried a more expensive one for reference, but nah, the cheapo eatery was both better value and for food it was the dog’s danglies. I don’t know how they do it. Best thing about Budapest though was although he was a very touristic sort of town, it wasn’t touristy. Unlike Prague, where you feel there is ‘you should do/see/buy/go to this’ agenda, Buda seems to be a sort of city with enough going on not to have to force you down a well-trod route. “Go on”, it seems to say “there’s so much here for you to find…come and play”.

Hungarians, if our stereotype aerials were working properly, seem to be a very chilled out bunch, lacking both the poverty that their past history has bought – we’re talking relative wealth of course, since buying stuff over there is dirt-cheap mostly compared to the UK – and some of the national bitterness that seems have remained in certain ex-Iron Curtain countries. Lovely, hard working people and gorgeous women, too. They reminded of the Dutch in some respects, who are equally pragmatic and tolerant, and with equally attractive women (question to self, am I turning into a middle-aged Eurobabe horn-doggy saddo? Those German and Polish women, now then, yummeeeeee….).

The she-wife decided we would stay in a four star hotel this time, rather than our usual ex-Ukrainian mining overseers wayzgoose refuge (£8 per room per night, one or two star concrete communist era bunker favoured by moi – as was the Daggersdukc trip to Krakow), so this was not a cheapo’s holiday, but we managed to only spend £400 between the two of us living pretty luxuriously considering our joint tightwad nature. And Sleazyjet only charged £120 return for a very late-booked flight – and only screwed up the outward flight with a four hour delay, so overall, not bad.
Posted by Adam at 1:53 pm