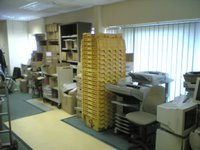 The photo says it all. But since that won’t mean much, I’ll explain. Five years ago, several teams at the place I work, including mine own, were shipped out, for purely political reasons – though few of us realised THAT at the time - to a bunker in Neasden, North West London. This was inconvenient for me since:

1) it is in the wrong side of London for easy commuting, not that commuting anywhere in London is either easy or pleasant. The direction of town would be OK (ish) if that place had been, say Golders Green or St John’s Wood. But it wasn’t…

2) …it was in Neasden, NW10. Anyone who knows anything about this godforsaken shithole knows that the best thing about it is the North Circular Road, which takes you east or west out of the place. It is as grey as an elephant’s arse and even the sun seems to skip the area entirely on its westward course across town. It has the charm of a Russian service station c. 1976. And that’s being somewhat unfair to Russian motorways. I may even leave a picture of the place when I leave this org so you can get a full idea of the extent of the nastiness of the place. I don’t want to ID my employer yet, I still need to pay the mortgage.

Now that the political side of things has been sorted out, my less-and-less beloved employer has decided that “oh, yes, there was enough space at head office after all”). That’s VERY GOOD then.

So, we are moving back to where we should have always been. In the thick of central London, near shops, fooderies, pubs (Neasden even lacks THEM – well it lacks any that you’d care to actually drink in).

When we leave this building, I’ll be baring my arse at it, then taking the Jubilee Line, not taking a backward glance. Goodbye, oh cancerous rot-fester of my life.

I am still applying for jobs elsewhere anyway. I am losing any sense of respect for and even benevolence toward my employer. Sooner I leave, the happier my state of wellbeing.
Posted by Adam at 10:46 am