Don't go to Leyton if you ain't a Muslim

I used to live not so far from Leyton. I spent six happy years in Hackney and always thought Leyton to be one of those parts of London that had not been poncified by outsiders too much. It has rows of terraced houses and although the parades of shops are filled with kebaberies rather than chippies as would have been the case before the 70s, it was still, in my opinion, a bastion of real Londoners. Places where people like me, born here, could afford to set up home and intended to. Just the sort of place for me. 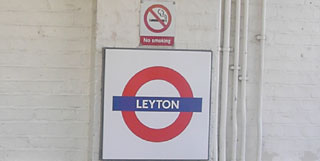 Oh darn, I should really consider converting before going here


Well, we missed the housing market boat too and moved out to Dagenham instead. Cheaper, but at least on the tube, and again, a London-y sort of place, even though some residents are proud of its ‘Essex’ identity. It didn’t get a London telephone prefix until the 60s. But back in Leyton, it seems I’d got it wrong all along – silly old me. Yes, as Abu Izzadeen reminded John Reid, Home Sec, that it is in a fact a “Muslim area”.

It wasn’t done with any sense of pride, or in the sense that a ‘Jamaican area’ might be blessed with white sands and aqua seas. No, it was in the Arnie sense of “get out, asshole”. His words to Reid were “"How dare you come to a Muslim area when over 1,000 Muslims have been arrested?" I’d forgotten that London was in fact an open city and as long as you keep to the law and remove yourself from trespassing on private property, you are basically free to travel anywhere you choose.

I was also reminded by the same person that "We believe Islam is superior, we believe Islam will be implemented one day. It is very rich for you to come here and say we need to monitor our children when your government is murdering people in Iraq and Afghanistan.”

A few reminders to this chap:

1. He is right, our beloved and oh-so-in-touch political elite has sent innocent soldiers to be butchered in a war that isn’t wanted by the majority of anyone and whose complexities are understood even less, Muslim or not. My sister’s boyfriend is one of those soldiers and deserves better, or at least potentially more random way of needlessly dying, say, by being hit but a drunk driver.

2. If Islam is truly superior, then let me declare now that I disagree. I, being a fat, ageing, grumpy fucker, think fat people who give copious grumpdom to the world, and who never receive any thanks for it, and who happen to be heading to towards their forties and all the sag that entails, are in fact the most superior people on earth. So naah naah na naah naaah to you, sonny Jimal.

3. If you really don’t even wish to start considering the possibility that even at its worst, a British (or at least Western) way of life is better the hell-hole you left to come and incite your racist, anti-democratic shit, then (expletive deleted) off, for the good of all of us. If Afghanistan is the logical conclusion of what happens when Islam is “implemented” (I still can’t get my head around what this might mean) then give me a Godless Sodom on speed every time.

And then politicians scratch their poor overworked heads when the BNP are gaining council seats You heard it from me first, or maybe not, but I’m very much afraid the only thing which will be “implemented” is the growth in support of the BNP, who are getting rather canny at picking off not only the usual suspect underclass white voter (my fellow Dagenham citizens being a case in point – and I don’t use the word ‘underclass’ in a derogatory sense, because I suspect I’m one of them, at least in the eyes of tosspots like Izzadeen). Even those whose families came from overseas in the 50s, 60s and 70s are allegedly joining. Those who have chosen to try and fit in with a society which is slowly acknowledging their vital necessity, and in the case of ex-commonwealth nations, their every damned right to be here. It hasn’t been an easy ride for them or us Anglos, but at least both sides, on the whole, have felt a need for friendship rather than race-hatred. Not a perfect ride, but a slowly moving truck in the right direction. I think Izzy would be happiest watching the attempts of his moderate brethren’s attempts to engage in dialogue jack-knife at high speed.
Posted by Adam at 9:27 am