Spent yesterday having a pleasant meander along the South Bank with Mrs DD and my favourite niece, Stacey. The Turkish festival which was basically a promo for food and holiday companies, was quite a disappointment, mainly because the venue, Bernie Spain Gardens, near the Oxo building was far too diminutive for the purpose. There should really have been more stalls selling food as well since we could only find three or four. We also bought some of the most disgusting yoghurt-based drink ever. It tasted like warm jizz, no kidding. Uck. Needed a diet coke to clear the taste. The only thing viler than this is Maubi fizz, a Caribbean drink. Its only worse because it lies to you and pretends its going to be a sweet little number. Smell - sweet. Initial taste. Matches smell. Pleasant. A tad sweet but no worse than regular Coke, say. Then 15 seconds afterwards, the bitterest and nastiest aftertaste kicks in. Imagine paint stripper and we're probably not too far away. Its a nasty, unpleasant surprise and how anyone can move onto a second bottle of it is far beyond my ken.

We also took in Tate Modern. We thought we might go see the Dali exhibition, but at £11 a ticket, this may be one I do on my own since Stace was only so-so into it and Lynn's would only get my interpretation of his paintings which seeing as my sight's not up to much anyway, may be a little skew-whiff. Not to mention confused.

The "girls" then went on and booked themselves an afternoon's play at the Globe (Othello) the jammy buggers.

Here's a picture I took of the inside of the old Bankside Power Station, home of Tate Modern, using my new Sony Ericsson K800i camera phone. This is by far the bestest phone snapper I've ever come across. My mate has a 3 megapixel Nokia N95 which I'd like to see strutting its stuff. The results of what this wee phone can do are quite amazing and I'm pretty impressed. Its quite a brick and doesn't do some of the things my Samsung D900 does, such as repeat message alerts ad nauseam, a feature I got to like for its self-annoyance factor. Generally I am extremely happy with it though there was a little jam-up yesterday which a restart cleared. Watch this space I suppose. 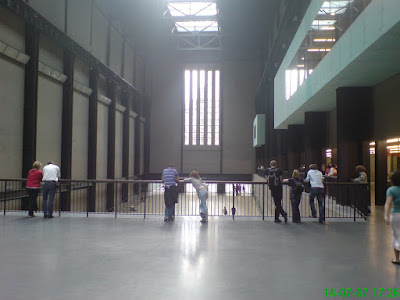