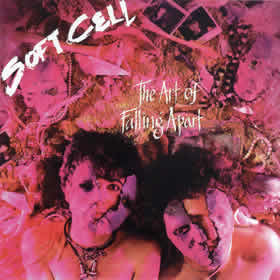 My right ear has been bunged up with wax and behaving rather unreasonably. It started out on Easter Friday and continued being mutt 'n' jeff until a few minutes before I rocked into work on Tuesday. Gree-ut as they say in Newcastle....

It was over the weekend after trying to make a mate's iPod synch properly with his copy of iTunes, that while drifting off to sleep, my own iPod threw a wonderful random track into the mix.

It was while drifting off to sleep that the magnum opus of TAoFA was revealed - a track called Heat. As spooky and disturbing in its own way as the creepiest record I've heard to date, Throbbing Gristle's Hamburger Lady. I've played HL to many a person who didn't previously believe that music could be genuinely scary - with mixed receptions from those who have become converts to those who simply asked me to turn it off (most a quite fascinated by what it is obviously doing to their perception and wish to hear it again, but in a "did that guy really eat his own shit?" sort of way.

This is one of those great lost 80s albums. Ones the critics will not include alongside, for example "Welcome to the Pleasure-Dome" by Frankie, Rio by Duran Duran or the ultimate 80s audio sum-up, according to yon host, The Lexicon of Love by ABC.

It would be hugely unjust to overlook this album though. It wasn't ever as rawly indie as the music released on Cherry Red, but it was a outlet of (and for) those many who were disenfranchised by Thatcher's "winner takes all" laissez faire greed and fuck you Jack society. But unlike the Smiths whose albums whined about just how plastic and silly 80s Britain was for the vast majority without a stake in Canary Wharf Porscheville or even access to a reppy Ford Sierra, this album served as a foghorn call reminding you that having such trinkets was a complete pile of jizz anyway. Screw all that, it said, get your blow-up doll out and get the family mutt to give you a blowy while the wife's out at bingo.

You know you want it.

Then afterwards, go blast your cranium with crystal-meth and burn your house down. With your family inside.
Posted by Adam at 9:23 pm