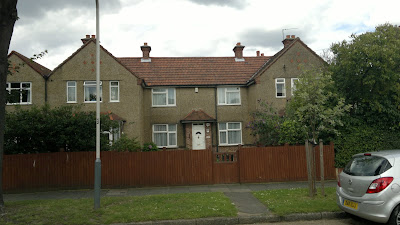 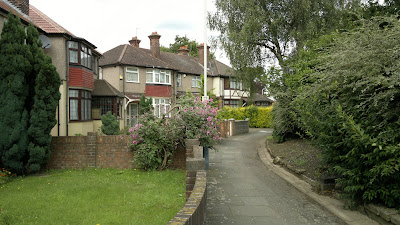 The nice end of Cranborne 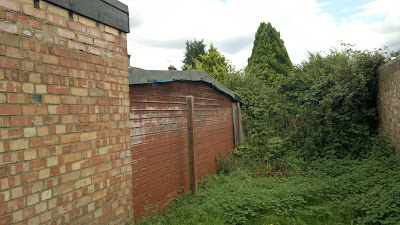 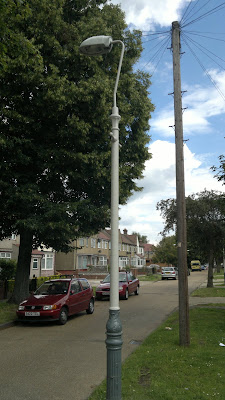 The nice end of Cranborne Waye 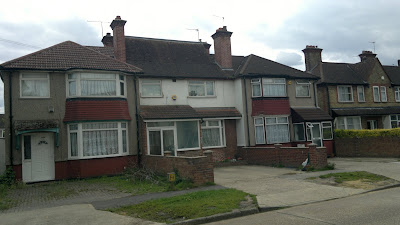 150 Cranborne Waye. Home sweet home for 18 years. The house looks a bit tatty compared to how it used to be. Mum's green fingers made the place a riot of colour when we were there – azaleas were her thing. The house looks small, and hemmed in by the two bay windowed dwellings either side. The lumpy roof is caused by the loft conversion. Huge windows are on the back of the house.

Original 1950s (?) swan necked street lamp. A rare breed these days, though New Addington near Croydon still has plenty to spare. The white cased HPS fitting doesn't do it any favours. I much preferred the orange LPS lamps, and because Hilling don Council didn't exactly spread them close together, our road always seemed quite dark and almost secretive compared to those of nearby friends.

A little patch of green. My favourite end of Cranborne Waye. Speaking of which, “Waye?” Please!!! Why the extra E? I have been told I've made a mistake spelling my own address when a child. Wrong. The twee-est part of a tweely named road.

The “big house”. No-one knew why or how this house got to be placed alongside a load of Warren Bros designed 3 bedroom terrace houses. And people who lived in it were a secretive bunch. Well, I suppose because they didn't have kids, we never found out much about them.