Jaywick on Sea - the bleakest place in England? 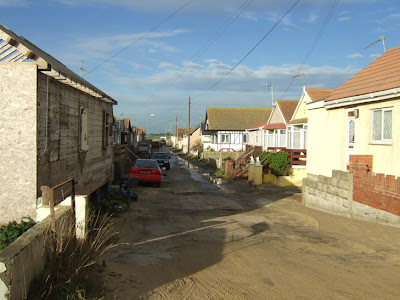 Here's a picture of Austin Avenue (taken from http://www.essexphotos.co.uk/

I knew once a rather posh, confident girl called Kate who grew up in Maldon and who used to go on about how scummy Jaywick, near Clacton is. Recently, one of our neighbours has been forced to move there because they can't afford the mortgage due to the husband leaving work due to disability. But Kate really was a few class grades above to put it gently. With a day off from the wife, I took a bus there from Clacton and your ''greeting', ie if you prefer, entry into the Twiglet Zone, for that is
Posted by Adam at 10:38 pm