Review of the Quality Chop House 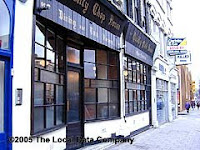 The Quality Chop House is one of those old London institutions in that it has traded at the same spot on Farringdon Street, more-or-less opposite the Grauniad, since 1880. On the outside it looks like a Victorian gin palace, and inside - well all I can say is that working class bottoms in Victorian times were considerably leaner than 21st century posterii. Bench seating and very narrow tables make eating quite uncomfortable, but overall I'd rather do it this way than have the place gutted and turned into a parody of itself. This is the real deal, so like living in a slightly breezy cottage, its worth putting up with its faults in order to experience its genuine charms.

The ambience is nice and homely, with warm lighting, a steamy atmosphere and helpful staff. The menu was fairly comprehensive and there is more on it than just meat. You can buy fish, snails and there's a reasonably wide veggie selection too. I had a steak tartare as a starter - fresh and tasty with just enough dill involved to kick arse. My main course of venison and mushroom pie appeared a little wimpy in its size, but game is so rich that I left with quite a bloat on my - and I can eat. But I think charging for extra veggies other than mashed spud is stingy. Dessert was one of the highlights, a crisp-on-the-outside-gooey-on-the-inside chocolate hot muffin type thingy, which was moist and perfect. My daughter, being an awkward cuss, wanted a very basic variation of a fish and chip meal (extra cheese, no veg). No problem. The sign of a customer-friendly restaurant.

However, much as I liked the food in this place, I think it was a tad expensive. Working-class it certainly isn't (not if you compare prices to real working class food such as pie 'n' mash anyhow). £28 a head (with two beers each). Not cheap, and the quality is on par with a good gastro-pub so I think you should be paying 25 percent less. This seemed to be opinion of the five others I ate with.