I was coming home from work via Rainham. As I was bimbling along on the 103 bus, it passed these flats - Cadiz Court as I later found out. I'd seen this block for years and didn't take much heed - except - I noticed there were no lights on. At all. Anywhere. The place wa abandoned. It even spouted a couple of mobile phone masts for that additional air of otherworldliness. I had to have a further look, and did. Trying the take a picture of the rear of the building, which is in a residential street, was impossible because of a lack of lighting. Most of the pictures on this site are 'vox pop' and taken with my trusty and nearly perfectly featured Samsung D900 phone (8 out of 10, highly recommended).

But it hasn't a flash. And the flats have a massive wall round them saying things like 'if you trespass here, you'll be chased kicking and screaming by a devil who has mental problems, new trainers and a set of Sabatier knives'. You get the idea. So this was taken on Rainham Road South itself and the because I'd been messing around with my phone at the back of the flats trying to make it take a picture of something which wasn't a square of black, the colour settings were screwed.

I ran it through the Mac and added sepia, but to be honest, although the colour wasn't as wild, and probably more representive of what I actually saw, drenched in a washed out brown-pink, I much preferred the red that my cameraphone captured, and so present it here.

May Cadiz court rest in peace. For 44 years it has housed families, both happy and sad, angry, disturbed and pleasant. Now looks like the kind of tower block in which only nightmares reside. 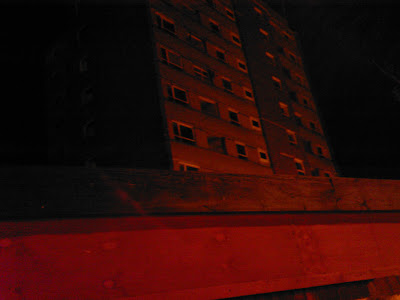